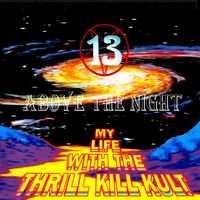 From the recording 13 Above The Night

Man on a red horse, man on a red Harley
Girl on a mind-trip, lost on the mindway
She commits to a custom bike guy
Over-sexed, rebel of rubber
Tired, punched and numbered
Off with her head said the King of Lightning!

There is an occult explosion taking place in the Western world
Would you like to come along for the ride?